The Phantom of the Opera Tickets

Book cheap tickets for The Phantom of the Opera through our secure theatre booking system. Get live availability information, check latest offers and find the best prices. Seat numbers are confirmed before you purchase. To complete your night out you can also add optional extras such as meal at a nearby restaurant for a fantastic value show and dinner package.

Based on Gaston Leroux's novel of the same title, Phantom of the Opera charts the tragic love-affair of the hideously disfigured Phantom, who lives in an opulent lair beneath the Paris Opera House, and a beautiful young soprano, Christine Daae, whom he has groomed for stardom. As the Phantom's lust and longing for Christine deepens, so the ends to which he turns his mystical powers become ever darker. The show first opened at Her Majesty's Theatre on 9th October 1986 and originally starred Michael Crawford as the Phantom and Sarah Brightman as Christine.

The combination of opulent sets and costumes, fabulous special effects and a spine tingling score makes Phantom a theatre experience not to be missed.

The show has become an institution in London's theatreland and according to producer Cameron Mackintosh, Phantom of the Opera is the 'ultimate theatrical musical'.

One of the things that has helped Phantom to endure and woo audiences for many years is it's ability to somehow reinvigorate itself with each new cast.

"I think with all long-running shows, you have to treat them like new shows," says Cameron Mackintosh. "One of the reasons they have run for so long is that we never take for granted that an audience is going to come through the door."

It is estimated the show has entertained more than 80 million people worldwide, with it being performed in more than 20 countries around the world, including USA, New Zealand, Japan, Brazil, Mexico, Australia, Korea, Spain and Russia.

The dazzling replica of the Paris Opera House chandelier is made up of 6,000 beads consisting of 35 beads to each string. It is 3 metres wide and weighs one ton.

The Phantom's make-up takes 2 hours to put on and 30 minutes to take off.

The white mask that appears on the the promotional posters for the Phantom of the Opera is quite different from the one the character actually wears. In the show, the actor wears a mask with a faintly greenish tinge, that only obscures the right hand side of the Phantom's face. It was thought that an actor would not be able to animate the role if a full mask was worn. With a half mask, one side of his face looks incredibly handsome and romantic and Victorian - while the grotesque part of his face is confined to the other half.

Combine a top price ticket for The Phantom of the Opera with a pre or post theatre meal at a restaurant within walking distance of the theatre. Select your tickets and you'll then get the option of adding a dinner package.

Create your own The Phantom of the Opera theatre break package. Decide which hotel you want to stay in, select the number of nights, add a meal in a restaurant, attraction tickets and include discounted rail or flight travel. 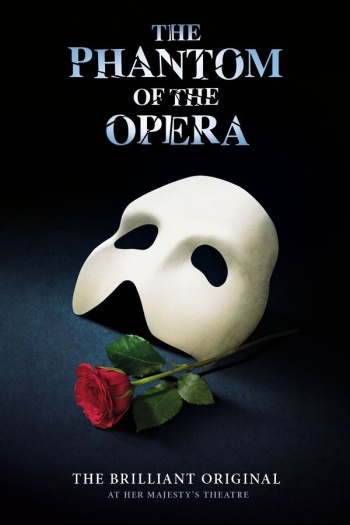